It was a quiet weekend at home this weekend.  We took some long walks in between rainstorms, did a small bit of shipping and lot’s of organizing.  I’ll be sharing some of those this week.  Some are so simple and cheap to do.  All it really cost is a little time.

I don’t know about you, but under my kitchen sink is where I put my focus, but for some reason, this weekend it caught my attention.  Here’s a before and after pic.  Maybe the camera doesn’t show it, but trust me, the change was big. 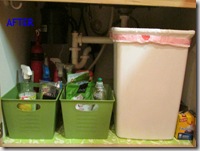 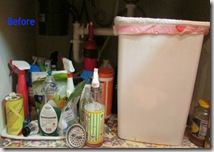 I had everything on hand.  I changed out the liner, and washed the inside walls and garbage can down.  The containers are from the Dollar Store and left  over from the bridal shower I gave for my niece.  The bins were used to hold game supplies.

As I said, simple and quick, but since I am always putting something in the garbage it’s nice to look at an organized space!

I also organized the silverware, dish towels and miscellaneous utensil drawer.  Have you ben organizing anything yet in 2013?

This entry was posted in ORGANIZATION and tagged Dollar store, kitchen, sink. Bookmark the permalink.

One response to “Organize–Under The Kitchen Sink”